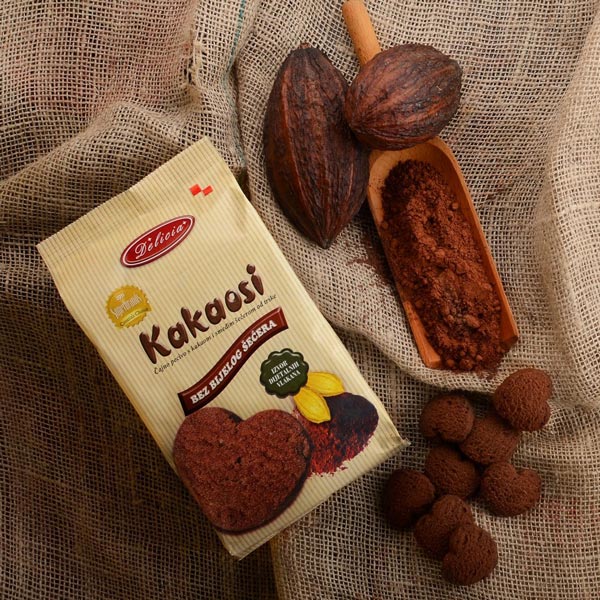 More than 3000 years before Columbus discovered America, Indians Aztecs were growing an unusual plant in the area of today’s Mexico. They moved it further and it was happily accepted by the Mayans and the Toltecs. From roasted ans grounded cocoa beans, Aztecs were making their “miracle potion” – xocolatl (xoc = bitter, atle = water). They believed that xocolatl has aphrodisiac properties and forbade women to drink it, while cocoa beans had so much value to be used as means of payment. Spanish conquerors brought cocoa to the Old Continent, and how much it was appreciated by the Europeans is best evidenced by Latin name for cocoa: “Theobroma” – food of the gods.

Our technologist helped theirselves with the ancient knowledge of the Aztecs. Among abundant application of “xocolatl”, they have added raw cane sugar, butter and other selected ingredients creating unique, dark, crunchy sweet which is also a source of fiber – “Kakaosi”. With the help of Aztecs and “food of the gods”.

This website uses cookies to improve your experience while you navigate through the website. Out of these cookies, the cookies that are categorized as necessary are stored on your browser as they are essential for the working of basic functionalities of the website. We also use third-party cookies that help us analyze and understand how you use this website. These cookies will be stored in your browser only with your consent. You also have the option to opt-out of these cookies. But opting out of some of these cookies may have an effect on your browsing experience. You can read more about our Privacy Policy here.
Necessary Uvijek omogućeno
Necessary cookies are absolutely essential for the website to function properly. This category only includes cookies that ensures basic functionalities and security features of the website. These cookies do not store any personal information.
Non-necessary
Any cookies that may not be particularly necessary for the website to function and is used specifically to collect user personal data via analytics, ads, other embedded contents are termed as non-necessary cookies.
Spremi i prihvati